As happens too frequently, my blog it seems has gone into an early hibernation.

Not that I don't have modelling on my mind. But with vacations, work and too many other distractions, modelling has been condemned to the backseat...

I hope to change that soon though.

But before I continue with the current builds I'd like to present a new gadget.

Recently, browsing through the internet, I stumbled upon a seemingly handy tool for (especially) car modellers.

Originally the tool is used for holding PCB's to aid with the soldering of the connections.

But on the internet someone used the same tool to hold the underbody of a car model. And I immediately thought, that's something that could come in very handy. A third hand, but than differently.

Aliexpress to the rescue. And some 2 months later (...) the item (after travelling the globe 3 times it seems) is finally in my hands.

I think it was worth the wait though. Looks sturdy enough and can easily hold a 1/24 car underbody. 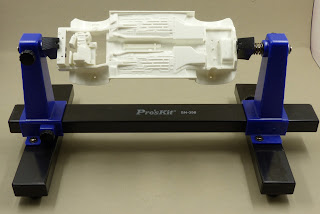