In-depth analysis of that first print

November 08, 2018
As promised I will present a more in-depth analysis of my first experience with the Anycubic Photon 3D printer.
Of course I'd intended this post to follow close on the heels of my previous post, but for some reason it seems 24 hours in a day just isn't enough...

First I'd like to talk about the print settings.

Anycubic provides a dedicated program to position your parts in and to set the printing settings.
Upon opening the program it shows you the boundaries of the printing area, some buttons to the left to manipulate the model(s) and the print settings to the right (showing the last used settings). 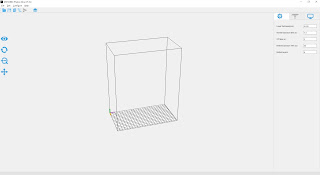 Positioning of the parts starts with opening a suitable STL file.
The part is than positioned onto the bottom grid. With the help of the buttons to the left it is possible to rotate and/or move the part(s) to the desired location. 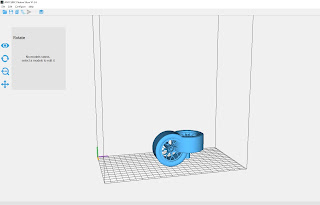 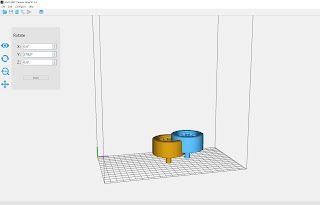 When the parts have the desired position it is now time to decide upon the support structure (to prevent sagging of the part during printing).
For this there are several options in the program. I won't dwell on them too long though. I decided to use automatic support generation, using medium supports. 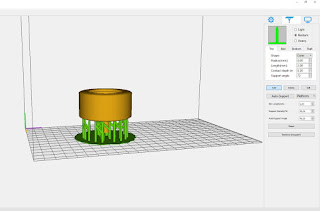 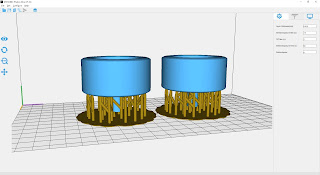 With the positioning and supporting of the part(s) out of the way, we can now pay attention to the print settings.
On the internet I found a very useful guide consisting of a spreadsheet listing all kinds of different resin makes and the settings other users have used for printing.
The spreadsheet can be found here.

In the end I decided on the settings shown in the right image above.
As you can see I used a layer thickness of 0,025 mm and a layer curing time of 7,5 seconds.
The first layers will normally have a longer curing time as these are the base layers where the resin will "grip" the print platform. Curing time and number of layers can be adjusted. I made an estimated guess based on the values in the spreadsheet I mentioned before.

After everything is set correctly the program will generate (slice) the file into layers for the printer to print. It is possible to (pre)view all the layers to check for irregularities (which I obviously didn't do, but more on that in a minute...). 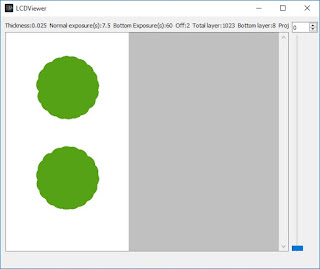 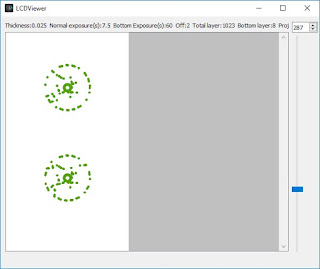 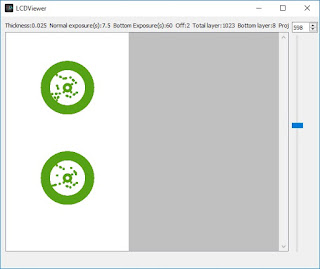 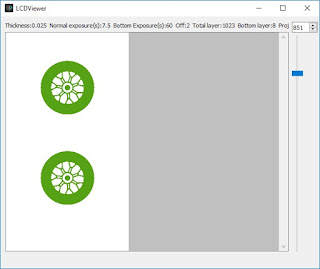 So far so good. Or so I thought.

After the wheels had some sun time I took them back inside to take a closer look.
There's a difference in end result between the two wheels. I'm not sure where these differences are coming from.

As can be seen clearly in the following picture, one wheel has a very rough and uneven structure to it (highlighted). It's a bit of a guess why, but it might have something to do with something I noticed during printing.
The other wheel appears not so good either, but I can assure that it is just superficial and I think it can be cleaned quite easily (I hope at least). 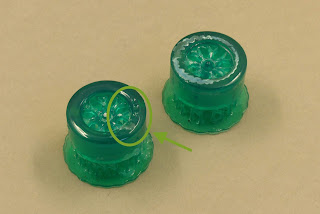 As mentioned before, the Anycubic software can automatically generate the support structures.
Sounds great. But as I have found out it's better to check before committing to print...
I could have noticed this on the previews of the splice file, but didn't.
The problem here being problem that some of the support structures lie flush against the inner wall of the wheel and axle. No real drama, just need to be careful when cleaning up.
But this is something that I could have spotted beforehand, making my life that bit easier... 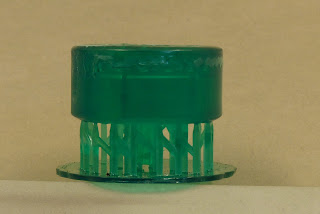 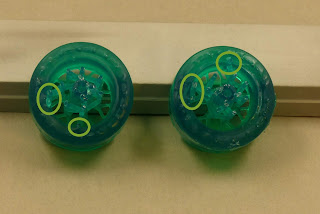 One other thing I noticed is that small openings easily get filled with resin. And although the resin (at first) should not cure in these places, it seems it did just that. Sometimes it's just a skin, other times more substantial. Making cleanup a bit of a delicate job.
Although I must say I'm still very impressed with the resolution and minute size of the openings you can achieve... 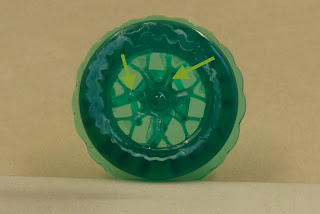 As I haven't had (or taken is more accurate) the time to tidy up the wheels, pictures of the "finished" articles will be shown in the next post.
Together with my final thoughts on my first print...