September 30, 2019
Moving on steadily I first studied the instructions and stills from the Casino Royale movie to see if there are differences between (the instructions of) the kit and the real car.

Luckily there don't seem to be that many differences. The few I found are listed below.

So the plan is to go for carbon fibre for the diffuser and front lips and follow Tamiya's instructions for the mirror mounts. 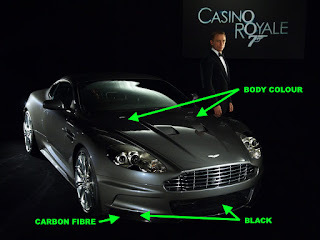 In the instructions from Tamiya I noticed that the vents in the hood should be painted (semi-gloss) black.
But all images I found on the internet and the stills from the movie showed that these vents were painted in the same colour as the body.
The grills in the front and rear bumpers do appear to be black though.
As can clearly be seen in the image above.
So that's what I'll be aiming for.

Looking at the instructions I must admit that Tamiya has put a lot of thought into the incorporation of the PE parts into the build.
Little mounting pegs are already provided for fitting the PE parts. Very convenient indeed.
And the solution for the the two bigger vents in the hood is just brilliant. The vents need to be (almost) flush with the surface of the hood. To achieve this Tamiya provided clear plastic inserts which provide a tiny ridge on which to mount the PE parts... Brilliant. 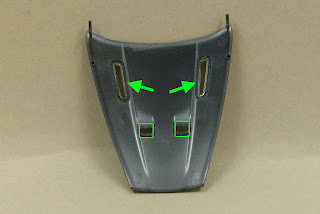 I was hoping to survive this build without the use of putty or filler.
Sadly the kit has been moulded with parking sensors in the front and rear bumpers. As James Bond is a certified übermensch he has no need for that kind of silly equipment... So the indents depicting the parking sensors will have to be filled. 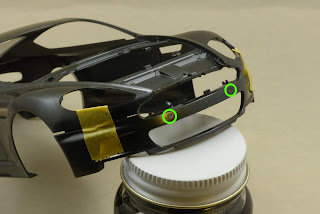 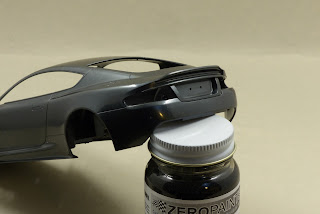 First I did a little test fit of the body and front bumper to see if the main body could be painted as complete as possible. Luckily that's the case. 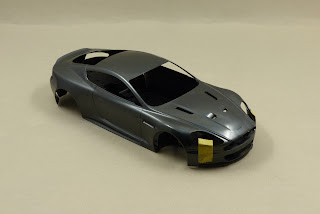 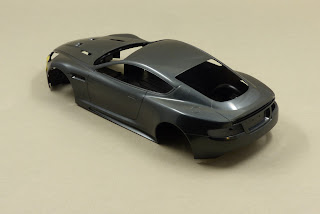 When studying the floor of the car I noticed that it has lots of ejector pin marks.
To check whether these needed to be filled I did a quick testfit of the interior and some of the engine parts.
To my delight none of the marks will be visible after everything is put together, so I won't have to fill any of these. Another example of the thought that has gone into this kit. 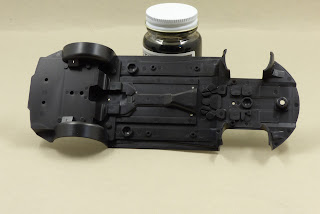 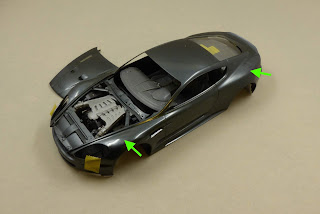 Some things can't be avoided however. The body features some mould lines (green arrows in the right image above) along the front and rear fenders. I'll be scraping/sanding these flush before I move on to the primer.

I already started to group the different parts by their colour to easy the painting process which will be the next step.

The next update will follow shortly, so don't stay away too long.
Previous part - Next part