May 27, 2020
As promised, only a few days since the first part, here's the second part of this build.
Once in a while I tend to keep a promise...
As mentioned in the previous part I have been studying the manual to figure out what needs to be modified for this build.
A few things were already shown in the previous part. Here I will discuss the other modifications I'm planning. This will be a nice exercise for when I'm going to build Gigi Galli's slightly beaten Xsara WRC from rally Portugal 2007...
Renaissance transkit 24/96 contains a PE sheet with mesh sections for the vents in the hood and the main grille in the front bumper.
Renaissance tells you to glue the mesh over the appropriate sections of the body. But I'm intending to remove the plastic and create some sort of box under/behind the openings to suggest depth. 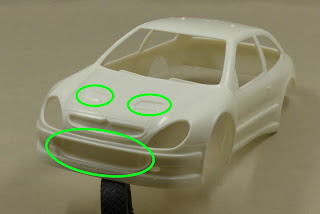 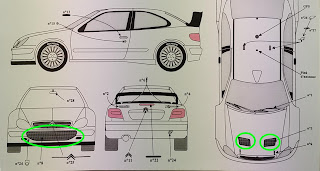 The body needs some parts removed and filled.
The molded quick-release bonnet and boot pins need to be removed as they will be replaced with PE items.
The holes in the roof for the antennas need to be filled as the location (and amount) of the antennas differs for the version I'm building. Which means that, apart from filling the original locations, I need to drill some holes for the new locations.
On the roof there are also 2 vanes which need to be removed as they didn't feature on the car of Francois Duval. A shame really as Renaissance has included some very delicate PE parts for this in their transkit. 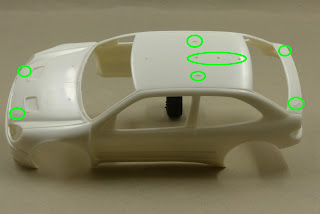 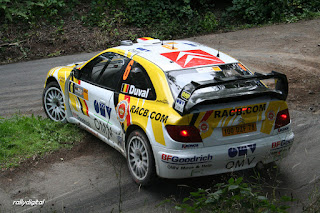 For the Citroën and Xsara texts on the rear of the car Heller supplies chromed inserts. These won't be used in this build as they weren't present on Duval's car. To that end I'll fill the indents in the body.
I'll also be filling the indent for the third brake light as Heller molded this too deep in my opinion.
I will also have to think of some solution for the Citroën logo. Heller has once again molded this on a chromed piece, but Renaissance provides a more scale version in PE. I think I will use the chromed part and sand and blend it to shape. 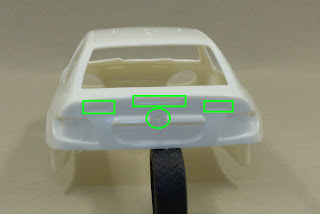 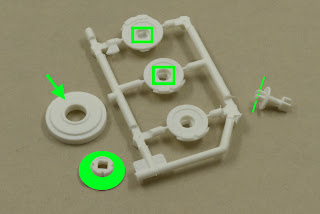 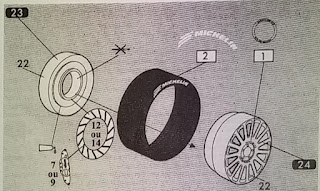 Sadly those stubs are needed to mount the wheels to the car (without fussing about too much).
I will be using the Renaissance brake disc parts as they're more appropriate for an asphalt version and I will be using the stubs from the kit, although slightly modified.
I will be removing the molded brake discs (big greenc circle) from the stubs and glue the stubs to the inner wheel halve.
This is necessary to correctly align the wheels with the body.
To make life easier I'll remove the front sections of the mounting points (dotted line) which feature a snap fit system and glue the wheels directly to the mounting points.
The wheels won't be able to turn, but that's alright for me.
I'll show this more in detail in the next part is this build.
In the meantime my order from Domino with the correct rally seats has arrived.
At first I was planning to use the seats from the Heller Citroen DS3 WRC kit (no. 80757) I have in my stash and keep the Renaissance seats for the Gigi Galli project.
When comparing the DS3 WRC seats to the Renaissance ones though, I noticed that the Heller seats seem quite oversized. As can be seen on the accompanying picture. I'm now not sure if I should use the Heller seats at all. I'll give it some more thought. 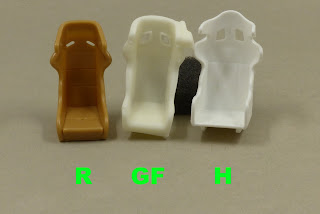 The seat in the middle of the picture is a replacement for the DS3 seats made by GF Models from Greece.
It has additional padding to the sides as is the standard nowadays. And they look great (and in scale).
A lot of blah blah but still no building.
Rest assured, the next update will feature some plastic surgery.
Until then, thanks for watching.
Previous part - Next part