May 27, 2020
Work continues.
Not as quick as initially promised. Which is explained in my previous post on my new hobby room.
Another problem that has prevented me from making quicker progress is the fact that during the move I managed to drop the compressor. At first everything seemed all right (apart from a dent in the laminate flooring in the attic).
But upon closer inspection the pressure regulator appeared to be damaged. So much so that I couldn't fix it myself, so I had to go find some help. Which was a bit of a challenge during the lock-down period. But in the end it was fixed, so time to get spraying.
In my previous post on this kit I mentioned that it was time for primer. But before I committed to primer there were still some things to do which I (luckily) noticed before priming.
One of those particular things was gluing an insert (part C16) to the rear lid on the body.
On the real car there is no seam on the rear lid (as there is no insert on the real car). As I had already prepared the putty, I decided to blend in the seam with the body (arrows in the right picture below). 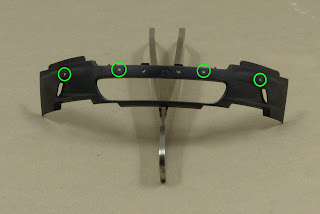 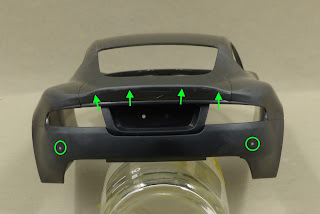 I also added some additional parts and PE parts to the body which will be painted the same color as the body. The PE parts were first attached with PVA glue and after it was checked their position was correct I applied CA glue to fix them permanently.
One thing I would like to say about the PE parts is that I keep being astonished by the amount of thought Tamiya has put into incorporating the PE parts. The parts fit perfectly. Positioning is helped by tiny locating pins moulded to the body. A really fantastic job by Tamiya. 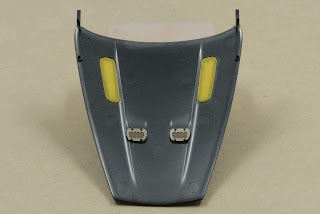 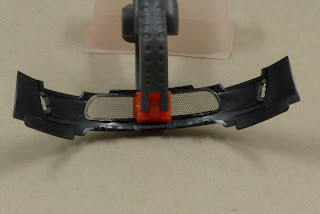 Finally it was time for primer
Priming presented me with two firsts... For one there was the first use of my new airbrush. And the second first was the use of Alclad's Grey primer and microfiller (ALC 302).
A selection of parts ready for primer: 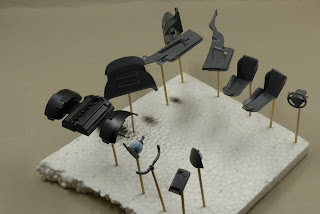 Most of the parts I sprayed with my trusty Harder & Steenbeck Evolution airbrush with a 0,4 mm nozzle/needle set.
For the larger parts I, finally, got to use my new Mr. Hobby PS-290 airbrush.
I must admit that it takes some getting used to. This airbrush really moves a lot of air and, for me at least, creates a lot of mist at times. So much so that I was fearing for a rough primer surface because of this.
But in the end that wasn't the case. I must say I am pretty pleased with how priming turned out.
The Alclad Grey primer and micro filler I used performed flawlessly straight from the bottle at the recommended 15 psi of pressure.
The end result is an extremely smooth and thin layer (which is handy as it doesn't clog fine PE parts). Very impressive and I'll keep using this primer on future builds as it is that good. 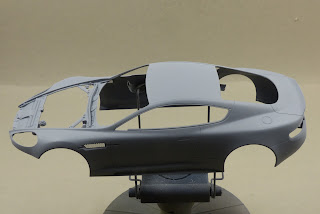 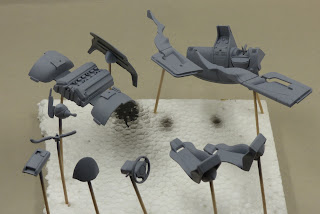 After priming I checked the parts for flaws or other areas that needed extra attention.
Luckily there were just a few spots to attend to.
The seam I treated on the boot of the car and the parking sensor indents being the most obvious here. 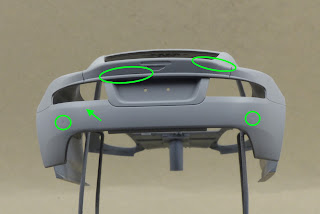 Apart from the car parts I also primed a piece of scrap styrene (sheet) for some testing. As mentioned in one of my older posts I'm not really on friendly terms with clear coats...
So to that end I primed the piece of scrap styrene so I can run some test with different kinds of clear coats.
That's it for now. Next post will be a bit more colorful I suspect.
Previous part - Next part.