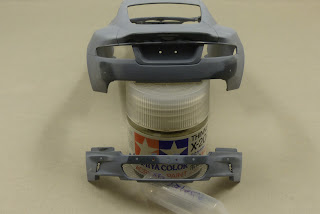 But that didn't stop me from adding color to parts that didn't need some extra attention.
I started off with white primer for the license plates and the engine cover, as they needed to be painted white anyway. For this I used white surface primer from Tamiya (decanted from the spray can). For some reasong the primer didn't really give a good coverage. For the engine cover that's no problem. The license plates will be getting some X-2 gloss white next.
When painting the engine cover I noticed that I've been very sloppy in cleaning the part. But as the hood will be closed anyway I won't bother about that... 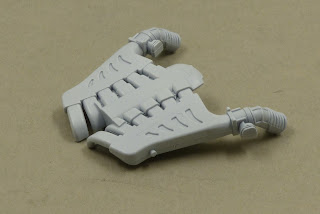 The parts that will get a chrome coat were painted gloss black. For this I used some Zero Paint gloss black paint. I sprayed it through my Harder & Steenbeck Infinity airbrush (which in essence is identical to the Evolution bar the looks). But I'm not totally happy with how the paint went down. I may have to strip the paint and start anew, I'm afraid...
For some reason I keep having difficulties spraying with the Infinity. Which is rather odd as the Evolution is my standard go to airbrush and has no secrets for me...
Fact is that I've been having little niggles with the Infinity ever since I bought it... Strange. 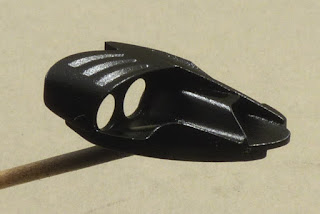 The exhaust also received its color. The instructions call for X-31 from Tamiya (Gold Titanium). But as I have this same color (in name that is) from the Alclad range, I decided to use the latter. 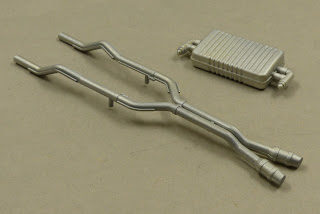 Lastly, all parts which required semi gloss black also received their color. For this I always use the semi gloss black from the Aqua Color range from Revell. I find this has just the perfect sheen (when thinned with X-20A from Tamiya).
After some more studying of the interior of the car I noticed (slightly late) that the seats on the Bond version of the car seem to look a lot like racing seats. Complete with 4 point harness.
Apart from that I also noticed that there's a fire extinguisher present in the middle of the back "seat". 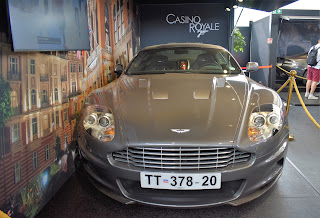 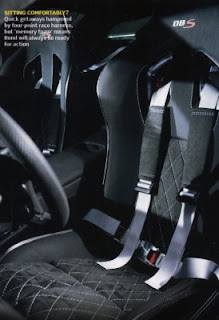 Luck has it that I have some left over racing seats and a fire extinguisher from the Xsara project I'm currently also working on.
I'm going to try to fit these into the interior before continuing with the painting.
The seats will need some work as they're not quite the same, but I think I might get there with the Heller seats as a base. 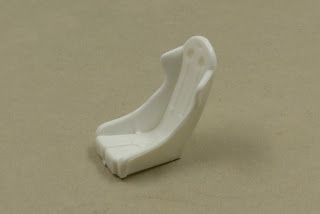 The holder for the fire extinguisher is not present in the kit so I drew my own holder in OnShape and next I converted the CAD file for my Anycubic Photon 3D printer.
The print is looking spot on and the Renaissance fire extinguisher fits like a glove. 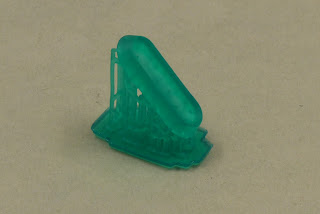 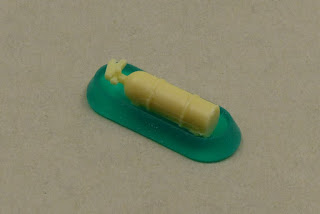 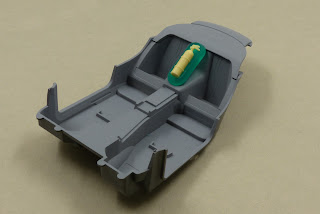 The back seat of the Bond car is far from standard anyway and it will take quite some work to get the model to look like the Bond car.
I will be cutting some corners here as good images of this part of the car are hard to come by anyway, so I will guestimate that part of the build. To that end I will build a section with sheet material where the holder for the fire extinguisher is mounted to.
Previous part - Next Part