The build of the Corvette is coming along slowly but steadily.
After all the work on the body everything had to be smoothed. This was done with putty, sandpaper and sanding sticks in different grades.
At the moment most of the sanding work is finished and the model is almost ready for primer.
Here's as few pictures of the current state of the build:

In the meantime I managed to prepare all the small(er) parts primer/paint. Only a small section of the parts is visible in the picture below.

As I've decided to glue the body to the floor, I won't be spending a lot of time on the engine, suspension and other internals. I will paint them and might try a few weathering tricks on the parts, but won't be detailing the parts. It will stay OOB.
For the cockpit I'm planning to go a bit further because it is a very visible area and I've found several useful reference images.
Sadly I had to conclude that Revell has left out several details for this specific version of the Corvette C5-R here too. But nothing that can't be fixed with a bit of styrene and some putty.

The rollcage in the kit wasn't complete. The section indicated in the picture below was not present in the kit. I'm still contemplating whether to scratchbuild this section or not. It's a bit dependent on the available space. I have to take some measurements first before deciding what to do. 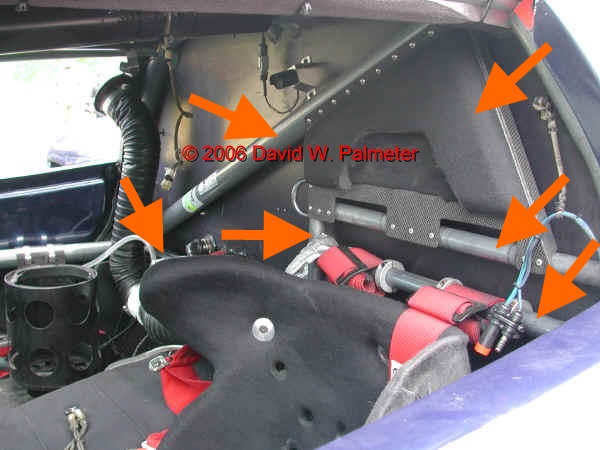 The passenger side of the interior for the real car is also different from what's to be found in the kit. But I think it will be relatively easy to scratchbuild the boxes in the picture.

I also started work in the driver's seat. I sanded down the straps moulded onto the seat. I will replace them later on in the build with some more realistic fabric seat belts. As I'm still working on the seat, I will show a picture of this at a later stage.

That's it for now.
Hopefully next time I'll be showing some painted/primed parts...